Section 285 of the Patent Act allows a prevailing party to recover attorneys’ fees in “exceptional” cases. [1]. In Octane Fitness, LLC v. Icon Health & Fitness, Inc., [2] and Highmark Inc. v. Allcare Health Management Systems, Inc., [3] the Supreme Court relaxed the requirements for proving an “exceptional” case in three significant ways: (1) now a party who files a section 285 motion need only prove that a case is “exceptional” by a preponderance of the evidence; [4] (2) the movant no longer has to prove bad faith and objective baselessness, [5] but instead must prove that, under the “totality of the circumstances,” [6] the case “stands out from others,” considering numerous factors, such as “frivolousness, motivation, objective unreasonableness (both in the factual and legal components of the case) and the need . . . to advance considerations of compensation and deterrence;” [7] and (3) the appellate standard of review under section 285 is now a deferential abuse-of-discretion standard. [8].

Intellectual property litigators must be aware of these changes and also how various district courts are applying them. This article analyzes the dozens of cases that have applied Octane Fitness and Highmark, with a particular focus on district court opinions, [9] and identifies helpful trends and insights for patent litigators.

I. CHOICE OF VENUE MAY IMPACT THE ODDS OF WINNING OR DEFEATING A FEES MOTION 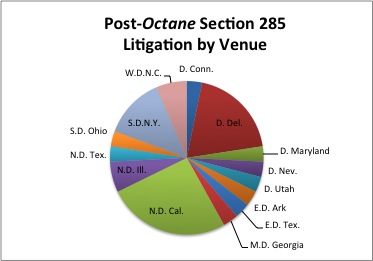 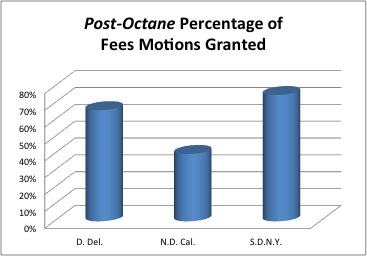 II. SUMMARY JUDGMENT DOES NOT NECESSARILY EQUATE TO FEE SHIFTING

III. OCTANE AND HIGHMARK MAY NOT BE AS STRONG AS SOME HAD HOPED

[5]. Evidence of either subjective bad faith or objectively baseless claims is still, however, highly relevant. Id. at 1757.

[9]. As of October 31, 2014, the only substantive ruling from the U.S. Court of Appeals for the Federal Circuit on a fees motion was in Homeland Housewares, LLC v. Hastie2Market, LLC, — F. App’x —, 2014 WL 4400184 (Fed. Cir. Sept. 8, 2014) (finding that the district court did not abuse its discretion). The Federal Circuit has vacated and remanded fee decisions in several other cases that were decided prior to Octane. Two cases from Circuit Courts of Appeal and multiple district courts have also addressed Octane in the context of Lanham Act violations; this article does not address those cases.

[17]. Some courts even appear to have changed their position on fee-shifting. See Joel Sayres, A Shift Toward Fee Awards in Delaware, LAW360 (October 16, 2014) (noting the apparent sea change in District of Delaware fees decisions post-Octane), available at http://www.law360.com/articles/586606/a-shift-toward-fee-awards-in-delaware.

[19]. As Morrow and Lahti noted, the legislative reform that died in May 2014 once Octane Fitness and Highmark issued may still be needed, especially the need to identify the real-party-in-interest in all PAE/troll litigation; otherwise, “patent defendants are left with the somewhat unsatisfactory remedy of the state-by-state provisions for bonding” as their only remedy if a PAE files bankruptcy or takes other measures to avoid an adverse section 285 ruling. See id.